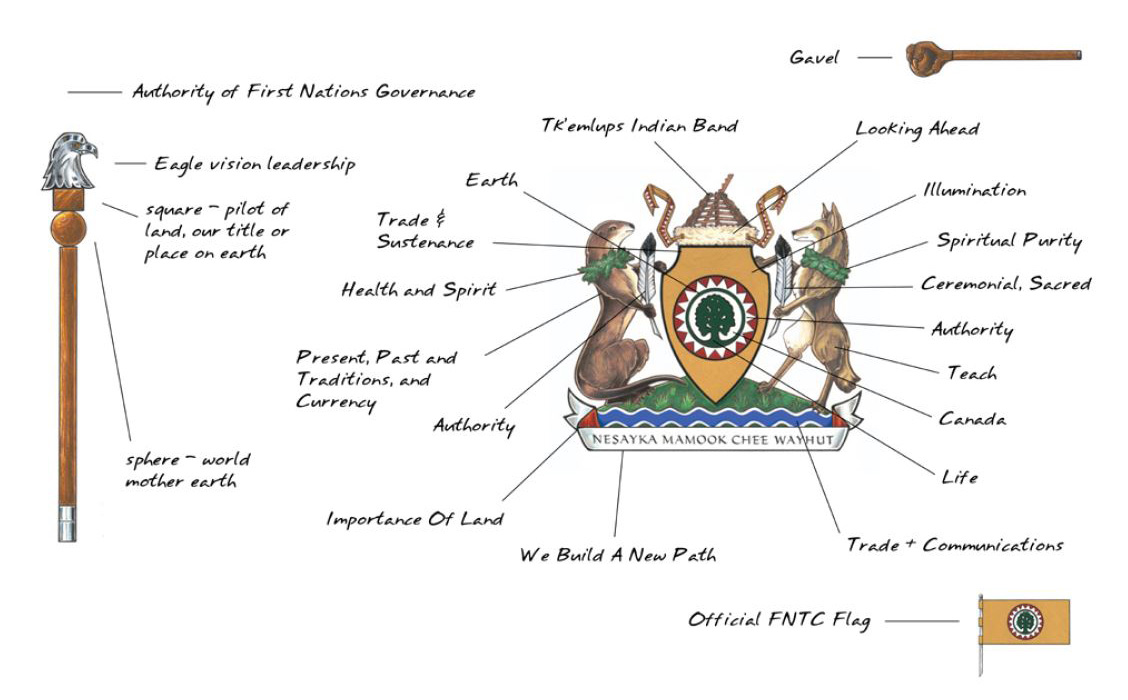 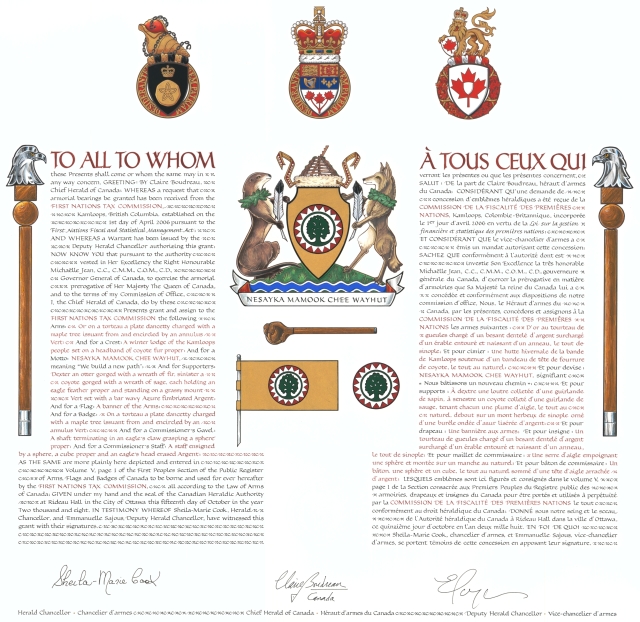 The central emblem is the logo of the Commission’s predecessor, the Indian Taxation Advisory Board, created by Tom Maracle of the Tyendinaga Mohawk Territory. The patterned outer circle represents the jurisdiction of First Nation governments.  The tree, strong and enduring, is symbolic of life, a habitat of animals and birds, a provider of shelter, heat, medicine, clean air and soil stability. Its branches and leaves represent First Nation communities and individuals within these communities. As it is a maple, it also represents Canada. The yellow is associated with chalcedondy, the east, and illumination. Red is the colour of the north and of spiritual purity. Green is the colour associated with the earth. The arrowhead shape of the shield reminds us of the First Nations way of life, especially related to trade and sustenance, going back countless centuries.

A winter lodge of the Kamloops people set on a headband of coyote fur. The winter lodge appears on the coat of arms of the Kamloops Indian Band of the Shuswap Nations and marks the fact that the Commission has its head office on the site of the band, a leading First Nations community in the field of development. More generally, as a form of shelter, the winter lodge speaks to the Commission’s role in facilitating housing development to benefit the community. The coyote fur, in the place of the traditional heraldic wreath, is based on a scouting hat and refers to the Commission’s work in looking ahead and providing for the future.

On the left, an otter with a wreath of fir. On the right, a coyote with a wreath of sage. Each holding an eagle feather and standing on a grassy mound. The coyote was sent down by the Creator to teach humans how to develop a society. The otter has intimate knowledge of the world of both land and waters. Just as the otter is able to move comfortably between two worlds, so too should all people be able to live in the present while at the same time honouring their past and traditions. The eagle feather is an important symbol of authority in First Nations culture. The mound of grass emphasizes the importance of land and the representation of water refers to the role of water in trade and communications.

This is the Chinook motto meaning “We build a new path” and refers to the Commission’s role in assisting First Nation governments to develop and establish property tax jurisdiction. Chinook, a 19th century trade language used extensively in western Canada and the United States, was spoken by many different First Nations as well as Europeans, Chinese and Hawaiians.