Under section 83 (s. 83) of the Indian Act, a First Nation may make by-laws for taxation of interests in land on a reserve. An interest in land* includes the right to occupy, possess or use lands in a reserve.

s. 83 taxation provides a basic regulatory framework for property taxation, but does not provide access to expanded tax powers such as service taxes, development cost charges and business activity taxes.

These by-laws must comply with all requirements under the Indian Act and applicable FNTC policies.

Each First Nation by-law is reviewed by the FNTC for compliance with all s. 83 and FNTC policy requirements. By-laws that meet all requirements are then recommended for approval by the Minister of Indigenous Services.

The links below go to the full legal document of the Indian Act and excerpt s. 83 (Money by-laws) that provides a power for Indian Act bands to make by-laws for the taxation of land or interest in land in the reserve.

This website uses a number of terms you may not be familiar with. For your convenience they are all defined in the glossary here.

Act of Parliament. Generally a collection of laws, bylaws & amendments pertaining to a particular aspect of the nation’s governance.

A debenture is a type of debt instrument unsecured by collateral. Since debentures have no collateral backing, debentures must rely on the creditworthiness and reputation of the issuer for support. Both corporations and governments frequently issue debentures to raise capital or funds.

A First Nation as a whole has the right to the use and benefit of reserve land. Interest of Individual First Nations Members: Under the Indian Act, individual members of a First Nation may be given allotments. An allotment is the right to use and occupy a parcel of reserve land. Allotments must be approved by the Band Council and the Minister. Once approved, the individual allotment holder has “lawful possession” of a parcel of land and may be issued a Certificate of Possession as evidence of their right. However, the legal title to the land remains with the Crown.

A memorandum of understanding (MOU or MoU) is an agreement between two or more parties outlined in a formal document. It is not legally binding but signals the willingness of the parties to move forward with a contract.

A policy sets out what a government plans to achieve and the process and rules used to do so as applied to various laws and creation of by-laws. A policy can identify new by-laws needed to achieve particular aims.

Real property, real estate, realty, or immovable property is land which is the property of some person and all structures (also called improvements or fixtures) integrated with or affixed to the land, including crops, buildings, machinery, wells, dams, ponds, mines, canals, and roads, among other things.

All relevant items of information within an ACT is called the Schedule. Under the FMA a participating First Nation is added to the schedule.

That which is established by authority, custom, or general consent, as a model or example.

First Nation Property Taxation by-laws create the framework for the administration of a real property taxation system under s. 83 of the Indian Act.

A First Nation taxing under s. 83 must have in place a property taxation and assessment by-law before it can levy and collect property taxes.

Property Taxation by-laws set out the requirements for:

The FNTC has established policies for First Nation property taxation by-laws that set out requirements for these bylaws.

Sample by-laws have been developed for each region in order to enable harmonization with provincial approaches where appropriate. See Policies, Guides and Samples on right sidebar: or below on small screens:

If you are considering developing a Property Tax by-law:

If you’ve decided to proceed with a Property Tax by-law:

POLICY For s. 83 Property Taxation By-Laws
STANDARDS: For the Submission of Information Required Under s. 8 of the Act

Sample by-laws have been developed for each region in order to enable harmonization with provincial approaches where appropriate.

A First Nation Property Assessment By-law creates the legal framework for conducting assessments of interests in land on reserve.

A First Nation implementing taxation under s. 83 of the Indian Act must have both a First Nation Property Assessment by-law and a Property Taxation by-law in place before it can collect property taxes.

The property assessment by-law provides the framework for assessing real property interests on a First Nation’s reserve lands. This law requires council to appoint a qualified assessor to determine the value of property interests that will be taxed.

It sets out the duties of the assessor, the applicable rules and practices, establishes the property classes and provides for the establishment and conduct of the Assessment Review Board.

The FNTC has established policies for First Nation property assessment by-laws that set out requirements for these by-laws.

If you are considering developing a Property Assessment By-law:

If you’ve decided to proceed with a Property Assessment By-law:

Here are Standards for the Form and Content of First Nation Property Assessment By-Laws.

POLICY: First Nation Property Assessment By-Laws
STANDARDS: For the Submission of Information Required Under s. 8 of the Act

Sample by-laws have been developed for each region in order to enable harmonization with provincial approaches where appropriate.

First Nations taxing under s. 83 are required to make an Annual Expenditure By-law.

This by-law provides the First Nation with the authority to expend revenues collected under its property taxation by-law for the current taxation year.

The Annual Expenditure By-law sets out how the First Nation:

Expenditure of property tax revenues can only be made in accordance with a budget set out in an expenditure by-law. The annual budget must be balanced (i.e. budgeted expenditures must equal budgeted revenues).

First Nation expenditure by-laws must comply with the Indian Act and the FNTC Expenditure By-law Policy.

Prior to submitting its by-law to the FNTC for review and approval recommendation, First Nations must do one or more of the following:

When you are ready to proceed: 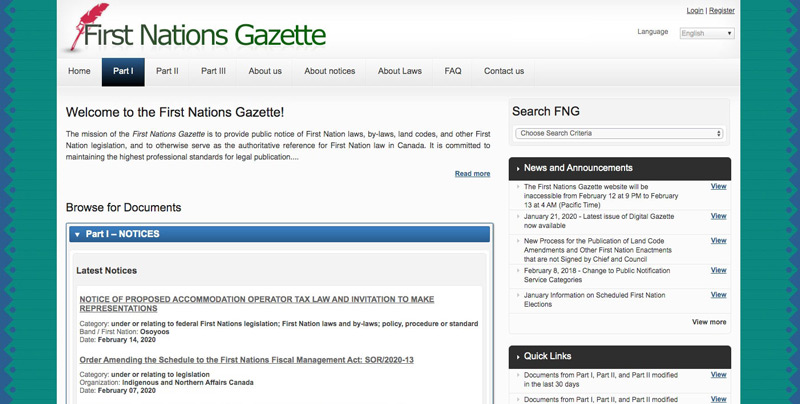 s. 83 taxing First Nations must enact an Annual Rates By-law. This by-law establishes the rate of tax for each class of property and sets minimum taxes if used. Also called the mill rate, the tax rate is typically based on the budget requirements of the First Nation with consideration of the rates used by the adjacent local government.

The Annual Rates By-law sets out the:

The timing of when annual tax rates must be set is established in the First Nation’s Property Taxation By-law. The deadline for setting annual tax rates is set out in the FNTC Policy for Annual Tax Rates By-laws. The Policy provides for First Nations to make annual expenditure by-laws at least once for the taxation year to which the annual laws apply.

Annual tax rate by-laws enacted under s. 83 must comply with the Indian Act, and any policies established by the FNTC. The FNTC has established Policies for First Nation annual rates by-laws that provide further requirements for the form and content of rates by-laws.

Prior to submitting its by-law to the FNTC for review and approval recommendation, First Nations must do one or more of the following:

When you are ready to proceed:

Once Property taxation, along with the required Assessment & Rates by-laws are established by Indian Act First Nations, they can consider building on that established framework with Specific Activity and Service Options by-laws.